There is a class of companies which enjoy a very strong competitive position in their respective markets. These companies have strong brands with their customers, great return on capital and finally good management.

There is ofcourse one small problem – Some of these companies are not growing rapidly. They are probably growing in the range of 10-15%, which is slightly higher than the GDP, but definitely not at the 20%+ rates of the past (which got them in the present position).

Lets call this the coca-cola effect. Why coca-cola ? let me explain

Coca-cola is one the most admired and high quality company. It has a very strong brand which has thrived for 100+ years. In addition the company has a global distribution network which cannot be matched by any company in the foreseeable future (in beverages for sure). 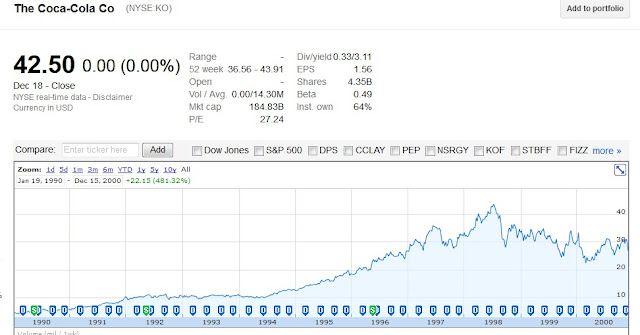 On top of this, the company was held by warren buffett. What could be a bigger endorsement?

There was one little problem – the company growth had already slowed, but the price was not reflecting this new reality. So what happened since then? 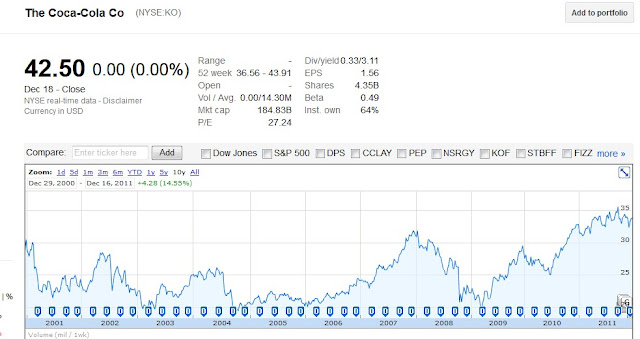 The company did quite well, but the stock went nowhere.

So lets define the coca-cola effect now
-           High quality company with great brands, strong competitive position and good management
-           Past history of high growth
-           High valuations
-           Slowing growth and lower probability of repeating the high growth of the past (key word – probability)
-           Price stagnates (low returns) as the earnings rise slowly , while the PE multiples contract in face of the new reality

Does this look familiar? I think so. I can think of a few companies in the indian market which will go through a similar phase. I will not give names as these are universally loved names and I will get hate mail and comments for suggesting that.

Let me however give a past example from the indian markets

Infosys ltd: see this chart below. The company has done well (profit grew by 15% CAGR during this period)  but investors have made around 6% CAGR in last five years (excluding dividends)

Why does this happen?
I can think of two reasons

Hindsight bias – investors are looking at the past, whereas returns depend on the future growth ! As they say, you do not get to go to heaven twice for the same reason. So if the future growth slows down, the returns are likely to be sub-par.

Contrast effect / Frog in boiling water syndrome – The slow down or price change is not dramatic. Price does not drop drastically, but kind of bobs around for a while. So after 4-5 years of holding a company, an investor wakes up one day and realizes that they have made a paltry level of return.

How to manage this?
For starters, one should get over the warm and fuzzy feeling of holding such a stock (I am guilty of this too). It is easy to fall in this trap as the company has done well in the past, rewarded you handsomely and is still universally admired.

The second step to take is to look at the future growth prospects and try to arrive at an upper bound for it. If company sells at a high valuation and is unlikely to see a further multiple expansion, then this growth will define the future returns for the stock. If the expected returns do not match your minimum threshold, start exiting the stock slowly over time (few are able to do it in one shot due to the emotions involved).

The caveat around continued growth
Some of you would saying to yourself by now that my previous argument does not square entirely with reality. There are a few companies which do not fall in this bucket. Recall my earlier point about coca-cola : Past history of high growth and slowdown in the future.

The companies which do not stagnate are those which are able to maintain an above average growth in the future. Such companies may appear to be overvalued for sometime, but are able to keep growing and hence justify the valuation. As a matter of fact, some of these companies even appear to be undervalued in hindsight

So what happens when you confuse these kind of companies (with good growth prospects) with my earlier example (coca-cola). Let me call that the marico effect !

A close friend of mine used to work in Marico and based on my understanding of the business (and inputs from my friend), I purchased the stock in around 2002-2003 time frame at around 5 times earnings (no typo there).

Fast forward to 2006, and after a lot of analysis and mumbo jumbo, I sold the stock as it seemed overvalued at around 30 times earnings. I was right, for a period of 3 years and then spectacularly wrong. Have a look the price action below

If you are comfortable with the long term growth prospects of the company and believe that the company will do well over the next 5-10 years, it would be silly to sell the stock as the earning would slowly catch up to the valuations in time and once that happens, the stock returns would match the earnings growth

There are no short cuts here – you have to decide if you are holding a cocacola (high quality, low growth), a marico (high quality, high growth) or a dog (no quality, just fluff) and act accordingly.

There is one action, which you should take without hesitation if you are holding a dog – Sell before everyone else realizes that it is a dog. A lot of investors in 2015 bought dogs and have only recently realized – too late, they are holding dogs !
----------------
Stocks and dogs ! discussed in this post are for educational purpose only and not recommendations to buy or sell. Please contact a certified investment adviser for your investment decisions. Please read disclaimer towards the end of blog.
Posted by Rohit Chauhan

Great analysis. Its basic stuff that many investors miss and therefore good to be reminded now and then. thank you!

Am not sure if Coca-cola is the right example. It pays good dividends. The price graph adjusted for dividends may present a different picture.

Very good post as always ! Just one query. What was your thought process while selling Marico ? I mean did you decide to sell because the stock had generated your desired return or you felt the business will not grow much now for a long time & hence sold the stock ?

How do you look at future growth prospects and arrive at an upper bound for it ?? It would be great if you explain with some example

Actually this is a problem with all well run companies. Reasons are not too hard to find. Once a large number of savvy investors understand the prospects of a well run company, they will bid up the valuations very high. Thereafter, for those valuations to be justified, earnings have to catch up, which is lagging in this case.

A more recent example is of course Eicher Motors. It has had a fantastic run-up in the last 3-4 years. *NOW* when the earnings are growing extraordinarily, the stock will go nowhere for the NEXT 3-4 years from its current price!

I infact I feel your decision to sell in September 2006 was rational because price at that point was not supported by required earnings growth. P/E had expanded to ~35x by September 2006 from 15x in 2000. Also, from 2009 onwards till 2016, it is more of P/E expansion than earnings growth. so my questions are -
a. Do you think your current logic is influenced by the price moment of the stock and not from the real earnings growth of company (2009-16)? Also, the 10x return is mainly because of equity run-up post Sept 2013 (Modi effect :) )
b. How much of your study has hindsight bias effect. If not, how should one go about differentiating between coco-cola & companies which have grown yoy for long term.

Kindly do not consider my comments as negative. I am just trying to understand the process.Below is the historical pe multiple of marico.

Very instructive post. I have faced (and still face) this dilemma many times. Though, on the face of it, it may look simple to figure out the future growth prospects and categorize the holding among Coca Coal/Marico/Dog, I have realized that due to our "holdings", and strong biases come into play it becomes very difficult to do objective analysis of growth prospects. Instead of being rationale, we rationalize...and eventually end up in trouble. Hence my question is, how do you control this process? What pointers/parameters you look for to give you clues to categorize these companies appropriately?